In the long list of apprehensions white Americans expressed concerning African Americans’ service in World War I, the question of training and commissioning black officers proved a major source of political tension. The eventual compromise led to one class of officers trained far from the South, in Iowa. From the segregated officer training camp at Ft. Des Moines, 1,000 newly volunteered civilians and 250 experienced soldiers trained from June to October, and 639 African Americans earned their commission on October 15, 1917.[i]

Consistent with the national success rates at Ft. Des Moines, at least twenty-seven black North Carolinians became officers in October, just over half of the forty-nine men identified for officer training. Fourteen North Carolinians were commissioned 2nd lieutenants, the lowest rank; eight as 1st lieutenants; and five as captains, the highest rank for black soldiers. Sixteen of twenty-seven men commissioned entered Ft. Des Moines from civilian life, and the other eleven underwent officer training as experienced soldiers. Secretary Baker assigned these officers to infantry, artillery, and engineering units of the newly created 92nd Division, and he assured military and civilian leaders that all commissioned black officers would be in the non-southern camps of the segregated division.[ii]

These officers were among North Carolina’s most distinguished African American soldiers, and many became accomplished men after the war. Commissioned officers from civilian life included 2nd Lt. Robert Smalls Bampfield of Wilmington, the grandson of famed Civil War hero and Reconstruction era politician from Beaufort, South Carolina, Robert Smalls. Educated at Johnson C. Smith, Bampfield also served in World War II, lived much of his civilian life in Washington, D.C., and is buried in Arlington National Cemetery. Another Johnson C. Smith alumnus 2nd Lt. Gurney E. Nelson of Greensboro, became a career educator after pursuing graduate education at the University of Chicago and Ohio State. 2nd Lt. Lovelace B. Capehart, Jr. of Raleigh became a pharmacist and physician after the war. 2nd Lt. Russell C. Atkins of Winston-Salem was educated at Hampton Institute in Virginia. Atkins worked before and after the war in agricultural education at Tuskegee. His father had been president of State Teachers College in Winston Salem. 2nd Lt. Atkins received the Silver Star for rescuing a wounded soldier while under fire in battle . Bravid W. Harris, Jr. of Warrenton became an Episcopal priest and bishop and eventually a missionary to Liberia in the ensuing decades. Lt. Harris received an official commendation for “meritorious conduct” in battle. Most black North Carolina officers led men of the 365th Infantry—the regiment with which most black North Carolina infantrymen served. Unfortunately for the state, many of these talented and educated native sons who returned from the war seeking opportunities found them outside of North Carolina.[iii]

Those commissioned officers with prior military experience included, among others, captains Moody Staten of Lincoln, Herbert Avery of Morganton, and Samuel Reid of Concord and lieutenants James W. Alston of Raleigh and Thomas Bullock of Henderson. Except for Capt. Staten, these men were in their forties at the time of commissioning. Their ages and military experiences set them apart from the other officers and nearly all the enlisted men. Lt. Alston, a veteran of the Spanish-American War, had an atypical experience for North Carolina black soldiers in other ways. He was one of the few North Carolinians who served as an officer in the 93rd Division, rather than the 92nd, leading men in the 372nd Infantry Regiment. Lt. Alston also corresponded during the war with a white employer, Herbert H. Brimley, curator of the State Museum, sharing his experiences and perspective. In his correspondence, Lt. Alston continually expressed optimism and conveyed his patriotic, anti-German determination to defeat the enemy. “Fritz can fight like the very devil when he is under cover and has the most men, but can’t stand the Yankee steel and these Yanks, white & black sure love to use the bayonet whenever they can get near enough to him.”[iv] 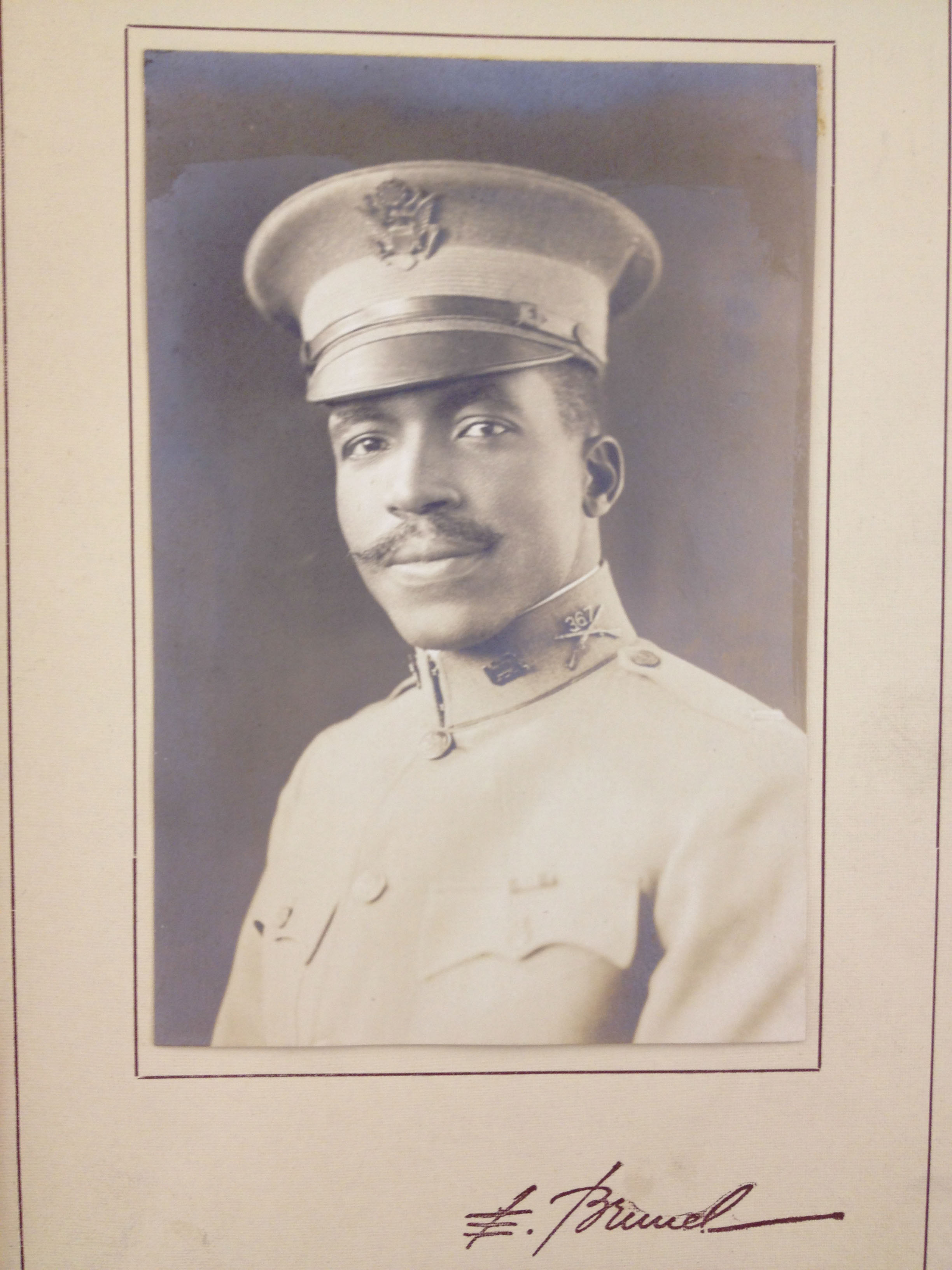 Another of the seasoned soldiers was Lt. Thomas Bullock, who led men in the 367th Infantry. With far more military experience than most North Carolinians, Lt. Bullock also had been a veteran of the Spanish-American War and had served three years in the Philippines with the 25th Infantry, one of the U.S. Army’s four all-black regular army units. In addition to his military experience, Lt. Bullock was college educated. A graduate of Lincoln University, the Pennsylvania alma mater of Thurgood Marshall, Lt. Bullock also taught at Williston Industrial School in Wilmington. In 1916 when the 15th Infantry Regiment of the New York National Guard organized, Bullock was among the first to volunteer. William Hayward, commanding officer of the New York regiment, readily identified him as an ideal candidate for officer training. So Bullock left the regiment that later became the 369th “Harlem Fighters” to lead men in the 92nd Division. Lt. Bullock was the only African American officer from North Carolina killed in action, dying on September 2, 1918 while in St. Die des Vosges.[v]

While Ft. Des Moines only commissioned one class of African American officers, the army had a few other opportunities for black soldiers to become commissioned officers. African Americans from North Carolina also became commissioned as physicians. Similar to most of their national counterparts, medical officers from North Carolina, who treated the wounded in combat, were recent medical school graduates. Two of those men, Lt. Egbert Theophilus Scott of Wilmington and Lt. Max Constuart King of Franklinton, attended Leonard Medical College at Shaw University. King finished his studies and graduated from Meharry Medical School in Nashville. Both North Carolina physicians, Lt. Scott and Lt. King, treated the horrific wounds of soldiers engaged in the final battle on November 10-11, wounds caused primarily by artillery and machine gun fire. Although born and educated in North Carolina at Biddle University (name changed to Johnson C. Smith in 1923) and Shaw University, Scott left his home state after the war for opportunities in Pennsylvania where he practiced medicine for fifty years. North Carolinians were also among the commissioned black officers in the chaplaincy. For example Lt. Alexander Huntington Hatwood, pastor of the Grace A.M.E. Church of Salisbury, served as a Methodist chaplain at Camp Taylor in Louisville, Kentucky.[vi]

[ii] Emmett Scott and William Sweeney list the 639 commissioned officers. Yet it is difficult to identify everyone from these two lists since state identification is only available for those who came to officer training as civilians and not for those who came from the Regular Army or who joined the National Army before attending the school. Sixteen North Carolinians appear in Scott’s and/or Sweeney’s lists. I have identified eleven others from my Database. Sarah McCulloh Lemmon, North Carolina’s Role in the First World War (Raleigh: North Carolina Department of Cultural Resources Division of Archives and History, 1975), 33. Scott’s Official History, 471-81; William Allison Sweeney, History of the American Negro in the Great War (G.G. Sapp, 1919), 86-88. Baker ordered the creation of the 92nd Division Oct 24, 1917, the week following the commissioning of the officer class at Ft. Des Moines.